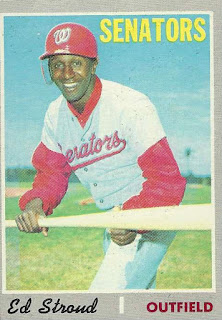 Smiling Ed Stroud appears today on card 506 of the 1970 Topps set. Ed appears pretty happy in spite of his card being dramatically mis-cut.

Stroud appeared in 129 games for the Senators in 1970 and made 479 trips to the plate. He posted a .266 batting average (second best on the team) and a .331 on-base percentage (third best in the starting lineup). Ed whiffed 79 times and walked just 40 but he really wasn't a slugger. He did put up 11 doubles, five triples (tied for most on the team), and five home runs but the triples were probably due more to speed than power. Stroud led the Senators with 29 stolen bases. He scored 69 runs while sending in 32 RBI.

Ed's primary position on the team was as the starting center fielder. He played 848.2 innings in center field over 106 games. He committed just two errors and ended the season with a .992 fielding percentage. That was much better than the .985 league average for center fielders. That's more impressive considering Stroud had more range than the average center fielder. Ed also played 51 innings in ten games in right field and 24 innings in nine games in left field, both with no errors.

Obviously Ed Stroud was just what the doctor ordered on defense in 1970. Offense was more of a mixed bag. The batting average, stolen bases, walks, runs, RBI, and doubles all moved in the right direction. On-base percentage, strikeouts, and caught stealing went the wrong way. That indicated Ed needed some work with the bat. The year of the pitcher was fast fading into memory. With the lowered mound, position players were expected to post higher offensive numbers and power was taking over from speed in the American League. Stroud needed to get all his numbers moving in the right direction if he wanted to stay with Washington.
Posted by Spiff at 2:57 PM