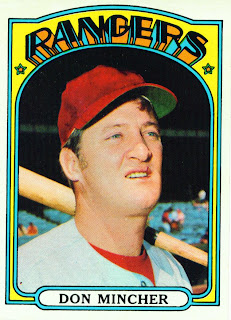 No game news out of Texas with the rainout last night. That will require a double-header tomorrow to make up. So far this year the Rangers have been doing pretty well in double-headers. Hopefully they can keep it up.

With the break in the late season action, I decided to take a quick visit back to the 1972 Topps set. Today we have card number 242, Don Mincher. Here we see the by now familiar airbrushed cap and red trim from the Senators uniforms. The back of the card informs us that Don was a first baseman and had a career batting average of .251 going into the 1972 season.

When this card photo was taken Don was about to embark on what would be the final campaign of his career. After playing 61 games for Texas that year he would be traded to the A's along with Ted Kubiak. 47 games for Oakland and that was it for Don.
Posted by Spiff at 6:05 PM

Those are great posts about Hideki and Matlack. As for 1972, the psychedelic tombstones, it doesn't get much better than that.