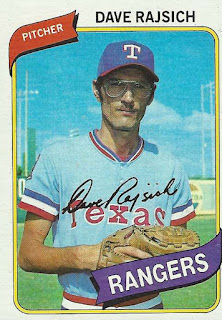 The thing that has always struck me about the picture on card 548 of the 1980 Topps set is Dave Rajsich's right arm. I have spaghetti arms but Dave's arm looks slender even to me.

The Rangers were looking forward to seeing what Rajsich could do with his new pitch, the forkball, in 1980. He had success with the pitch late in the 1979 season and ended the year strong. Texas was hoping Dave would play a big role in the bullpen in 1980.

Rajsich made 24 appearances for the Rangers in 1980, all but one out of the bullpen. The lefty tossed 48.1 innings and struggled to a 5.96 ERA (highest of any Texas reliever) and an 1.614 WHIP. He walked 22 but also struck out 35 opposing batters. Additionally, he hit three batsmen. Dave ended the season with a 1-2 record and two saves. A three game stint with the Triple A Charleston Charlies didn't go any better. Rajsich put up a 9.00 ERA and 2.250 WHIP over four innings.

Apparently the forkball did not work out during the 1980 season the way Dave Rajsich or the Rangers expected. That would earn Rajsich an assignment to Triple A Wichita in 1981. He would play at Triple A for several more seasons for Texas but never make it back to the Majors. The Rangers traded Dave to the Phillies in October of 1981. Philadelphia released him in March of 1982 and Texas picked him back up. Following the 1983 season Rajsich left the Rangers organization for good. He spent 1984 with the Hiroshima Carp of the the Nippon League. It was back to minor league ball in 1985. Bouncing around between St. Louis, Baltimore, and Kansas City, Dave lasted through the 1988 season before hanging up the spikes for good.