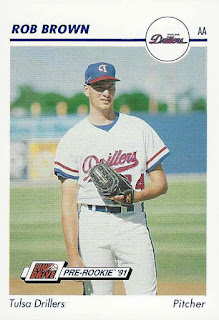 Rob Brown, shown here on card 576 of the 1991 Line Drive set, was coming off a pretty impressive 1990 season with A+ Charlotte. As a reward for his efforts, he would find himself assigned to Double A Tulsa for the 1991 campaign.

Primarily a reliever, Brown appeared in 43 games for the Drillers in 1990. All but four of those appearances were out of the bullpen. Interestingly, Rob pitched a complete game in one of the starts he made. Brown's numbers were a mixed bag in the 117.2 innings he pitched. His ERA rose to 3.29 and his WHIP skyrocketed to 1.436. However, he still struck out more opposing batters than he walked - 86 whiffs compared to 39 free passes. He ended the season with four saves and a 7-6 record.

1991 hadn't been a terrible season for Rob Brown. He saw his ERA go up but that was to be expected with a promotion and things hadn't gotten too far out of hand. He also kept his strikeout to walk ratio looking pretty good and proved his versatility by pitching in several roles throughout the season. His WHIP was a matter of concern though. Brown was getting hit more often than he had the previous year, much more. It was something to keep an eye on. The Rangers decided to start Rob at Double A in 1992 and see what developed. If things went the way Brown was hoping, a ticket to Triple A Oklahoma City was a definite possibility.
Posted by Spiff at 9:30 AM