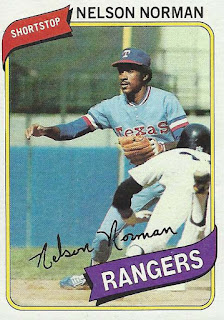 Nelson Norman appears to be preparing to accept a throw from the catcher in an attempt to catch a thieving Yankee on the front of card 518 of the 1980 Topps set. Kind of a unique shot, coming as it does from the first base angle.

Norman came to Texas as a throw in part of the trade that brought Al Oliver to Arlington in December of 1977. In 1979 he was the starting short stop for the Rangers. In 1980 he came out on the short end of the platoon stick as he lost out to Pepe Frias and Bud Harrelson.

After appearing in 17 games and making 34 plate appearances, Norman was hitting .219 with a .242 on-base percentage. He had zero power, with no extra base hits. He walked once, struck out once, and got caught stealing once.

All 17 of the games Nelson played in, he played at short stop. Over the 101.2 innings he played there he committed four errors for a .943 fielding percentage. That was twenty points lower than the league average.

Clearly things were not going Nelson Norman's way in 1980. The Rangers decided it would be best to send the 22-year-old back to Triple A for some more seasoning. They optioned him on May 7, 1980. Just over a month later, on June 14th, he suffered a hyperextended knee. The injury caused nerve damage and ended Norman's 1980 season.