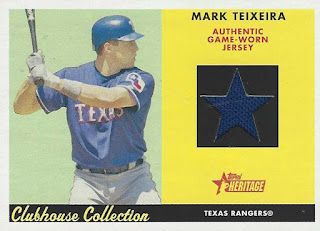 It's been a long time since I did any trading but over the past week I had two packages come in. The first was a nice lot of recent Rangers courtesy of a Facebook trade on a group for through the mail autograph collectors. I must admit I was a bit leery of the deal at first but it turned out great and filled quite a few holes in my collection.

The second package was from Matt over at Bob Walk the Plank. Matt always sends great stuff and this time was no exception. Included in the package was this 2007 Topps Heritage Clubhouse Collection game-used card featuring Mark "Money Man" Teixeira and a piece of one of his jerseys. Also in the lot were game-used cards of Rafael Palmeiro and Michael Young along with autographs of Marlon Byrd and Mitch Moreland. A very nice assortment that all hit wants in my game-used and autograph collection. Thanks Matt! I'm running low on Buccos but I'll see what I can cobble together for you in the near future.

Apparently I wasn't the only one trading. Texas GM Jon Daniels was busy as well. On Tuesday the Rangers traded catcher Bobby Wilson and minor league pitcher Myles Jaye to Detroit for backstop Bryan Holaday. Holaday is now slated to start the season as backup to Robinson Chirinos. That leaves Chris Gimenez looking at starting the season in the minors. Gimenez can refuse an assignment to the minors and become a free agent but Texas is hoping he won't and will clear waivers. As for Holaday, I don't know about his defense but he hit decently as a backup for the Tigers last season and looks to be an offensive upgrade.