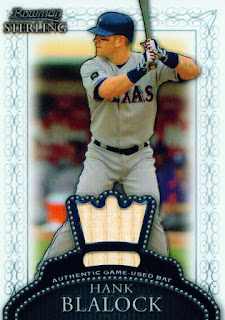 Only one return this past week from my through the mail requests. Former Rangers backstop Mike Stanley signed and returned two cards to fill two holes in team sets I am working on getting signed. I really appreciate Mr. Stanley taking the time to sign and return the cards, I just haven't had the time to get them scanned in for this post.

Since I haven't scanned the latest through the mail returns, I decided to post a game-used card today. Been awhile since a certified autograph or game-used card made an appearance. The random selection from the game-used box today is this 2005 Bowman Sterling card of former Ranger Hank Blalock. The card is number BS-HB in the set and features a bit of one of Hank's bats embedded in it.

Speaking of bats, the Rangers brought a new bat on board on Monday. The club inked former Washington National Ian Desmond to a one-year deal. Desmond has played almost exclusively at short stop during his Major League career but he agreed to move to left field prior to signing with Texas. The signing is projected to give the Rangers a bit more power in the lower half of the batting order. Jon Daniels said he expects Desmond to play left field for the entire season, not just until may when Josh Hamilton is supposed to be back. That presents an interesting situation. It is possible that Desmond will play the first part of the year in left field, then occasionally be spelled by Hamilton and in turn, spell Elvis Andrus at short after Hamilton returns from the disabled list. Unless the Rangers are concerned Josh might not be back at all this season. Either way, the signing gives Texas some depth and options. Should be very interesting to see how it works out.
Posted by Spiff at 10:00 AM