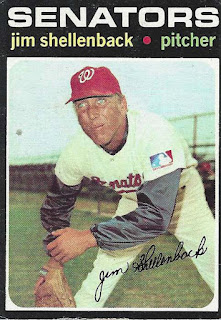 Coming off a mediocre 1970 season, Shellenback was looking to either solidify his place in the Senators bull pen or break into the starting rotation. Unfortunately, he was unable to do either and continued in his role as long reliever/spot starter. He did manage to stay in the Majors all season though.

In the 40 games Jim appeared in for Washington in 1971 he pitched 120 innings. Those numbers were only a smidgen higher than the previous season. Shellenback managed to lower his ERA to 3.53 but his WHIP crept up to 1.433. The higher WHIP was probably partially due to his continued control struggles, Jim walked 49 opposing batsmen while striking out just 47. Surprisingly, he did toss a complete game shutout. That was probably a good thing for him - it accounted for one third of his wins as he ended the season 3-11.

Jim Shellenback did not have the break through season he needed in 1971. It was beginning to look like the lefty would be a career journeyman. Now the only thing to see was if the move to Texas would help or hurt his efforts.
Posted by Spiff at 10:00 AM