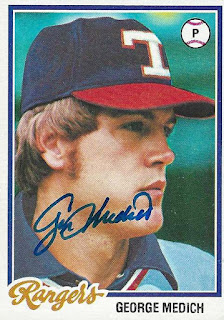 Almost shut out on the autograph front this week. Former Rangers pitcher George "Doc" Medich swooped in on Monday to save the week with this signed 1978 Topps and an accompanying 1979 Topps that he also signed. I sent the cards to Dr. Medich on February 24th and he was kind enough to sign and return them. It was the sole return for me this week but both cards hit holes in my autographed team sets. Many thanks to Dr. Medich for his time.

Meanwhile in Surprise, Arizona the Rangers are continuing to get into shape for the upcoming 2016 season. I received a report last night from a friend who is down there. Apparently Joey Gallo is putting on some impressive power displays and Hanser Alberto looks very good on defense. With manager Jeff Banister considering a 13 man pitching staff, the competition for position player spots could intensify.

The club has made two rounds of cuts though so those left have been getting increased playing time. That will help in the final evaluations and the final decision on whether or not to trade a bench spot for an extra pitcher. Look for final decisions to be made soon with Opening Day only about two and half weeks away.
Posted by Spiff at 9:30 AM