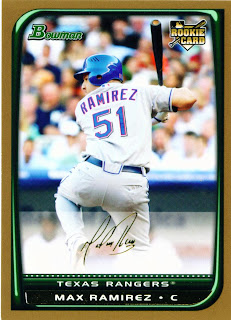 Texas put Josh Hamilton on the Disabled List today. To replace him on the roster they called Max Ramirez up from Triple A. Ramirez, seen here on his 2008 Bowman Draft Picks Gold card, is a heavy hitting catcher. Jarrod Saltalamacchia is suffering from eye irritation in both eyes so Max will be backing up Taylor Teagarden. Hamilton is expected back on May 12.

Ramirez got a taste of the Bigs last year when Laird and Saltalamacchia were both injured. He is considered a top prospect but needs some work on his defense. His bat is not a concern. In 2007 he hit .304 with a .504 slugging average. This stint in the Bigs could be a nice opportunity for him. No word on if he will stay around until Hamilton comes back of if he will get sent back down when Salty is ready to get back to work.
Posted by Spiff at 8:49 PM

What's with the catchers and their eye problems? Brian McCann seems to be going through some sort of weirdness, too.