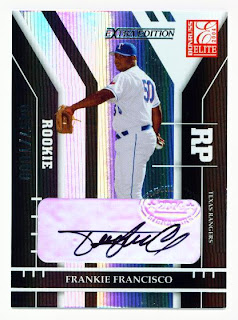 Texas downed the A's last night to claim sole possession of first place in the AL West. Been a long time since that has happened. Special thanks to the Kansas City Royals for slapping the Mariners around to help the cause.

Scott Feldman pitched well in the win, allowing two runs in six innings with three strikeouts. Derek Holland also did well as he tossed two scoreless innings. Elvis Andrus got the Rangers on the board in the first with his second career homer.

Perhaps the highlight of the night was Frank Francisco, seen here on his 2004 Donruss Elite Extra Edition card. This card is number 277 in the set and this particular one is serial numbered 467/1000. Frank's season saves are numbered 9/9. He has a 0.00 ERA on the season and has yet to blow a save opportunity.

Texas needs a good closer to compete and Francisco seems to be filling the bill. Very nice to be saying good things about Ranger pitching. Unusual but nice.
Posted by Spiff at 6:56 AM

Yes, Rangers and good pitching are not to things that are usually put in the same sentence. AL west is off to a crazy start this year.