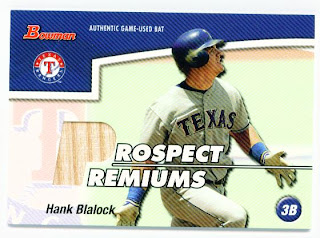 Today's card is number PP-HB in the 2003 Bowman Draft Picks and Prospects set. It features a piece of Hank Blalock's bat.

Last night's game featured a piece of bat work by Hank. With one out in the 11th inning he smashed a two run double that gave the Rangers a come from behind victory over the Mariners. Gotta love happy endings.

Brandon McCarthy and C.J. Wilson both struggled in the game but Darren O'Day and Eddie Guardado did well. Michael Young had a throwing error that led to a run but redeemed himself by being one of the runners that Blalock drove in.

While I like these extra inning walk-off wins, I find them somewhat disturbing if they happen too frequently. Things just don't always work out well in those scenarios. Tonight is the last night of the Rangers/Mariners series and then the Angels come to town. Frank Francisco is supposed to be back in action for Texas. John Lackey should be starting the second game in his first appearance coming off the DL.

Time to get the hatches battened down. The Rangers have to be able to beat the Angels head to head in order to compete in the A.L. West. Hopefully they'll be able to do so this weekend. With only a 1.5 game lead, they have to in order to stay on top.
Posted by Spiff at 9:44 AM