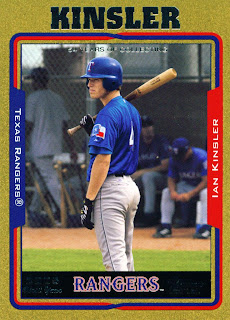 Texas tried to snatch defeat from the jaws of victory last night but were ultimately unsuccessful. Starter Kevin Millwood turned in a decent performance as he went six innings and gave up only two runs to Anaheim. Not spectacular but with the score 7-2 it appeared that it would be enough.

The Rangers added three more runs after Millwood's exit while the Angels could only come up with one. That made it 10-3 headed into the ninth. Two quick outs and it seemed that the Rangers would easily sew it up. Then Derek Holland melted down. Five runs later, C.J. Wilson would come in and get the third out to give Texas a 10-8 victory. Nasty, but it still puts them up 2.5 games over the Angels. It also puts the team's winning percentage at .600.

Ian Kinsler was a bright spot though. Kinsler went 2-for-3 with two walks and three RBI. Ian's two home runs were both off Halos starter Joe Saunders. That performance earns Kinsler today's card, his 2005 Topps Gold card, number 302 in the set and serial numbered 1422/2005.

In spite of Kinsler, Young, and Hamilton doing well, the Rangers are going to need some pitching this afternoon in order to win again. John Lackey is coming off the DL today to face the Rangers. It would only be considerate if they welcomed him back with a pounding and a loss. Vicente Padilla has been lights out his last two starts. Hopefully he can remember where the switch is and keep them off.
Posted by Spiff at 12:51 PM