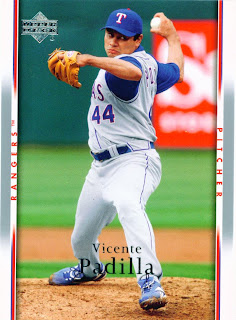 Wow! Saturdays sure seem to be getting hectic around here lately. I just couldn't seem to to find the time to post last Saturday with working third shift, helping with a fundraiser, and mowing the lawn. Sorry about that.

During my posting absence the Rangers managed to hold on to first place so that is good. Kevin Millwood turned in a strong performance but didn't get any run support and fell to 3-3. His record should be better.

Matt Harrison tossed a complete game shutout under the direction of Taylor Teagarden who seems to have become Matt's personal catcher. I'm cool with it as long as it works.

Vicente Padilla won his second of the season yesterday against the White Sox. He lasted seven innings and allowed just one run and one hit. Meanwhile the Rangers unloaded on the Sox and smashed seven runs across the plate. But for a wild pitch, the lone ChiSox run would not have scored. Even with the wild pitch and the resulting run, that is a nice day on the hill.

What makes the win noteworthy though is that it was the second game in a row Padilla allowed just one hit. That makes Padilla, seen here on card number 229 of the 2007 Upper Deck set, the first pitcher in Rangers' history to do so. Not sure if that is a comment on Padilla or Rangers' pitching but I'll take the wins anytime.
Posted by Spiff at 10:48 AM

I think it was a combo of great pitching by the Rangers and lousy batting by the Sox. The Sox had their opportunities to strike and blew it. My hat is off to the Rangers staff.