Manny, take a lesson from the Little Professor. 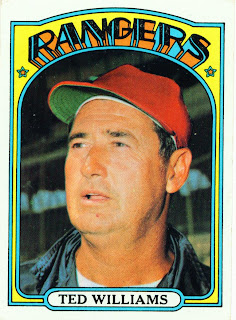 Sad news today all over in spite of Texas hanging on to first place.

The saddest news was the passing of Dom DiMaggio. Dom was a great player who was somewhat overshadowed by his brother, Joe. He put up some great numbers of his own though and is considered by many to be a borderline Hall of Fame candidate. He was also the last of the three DiMaggio brothers who played in the Majors. Baseball has lost a piece of its fabric with the passing of this class act and fan favorite. Ramirez could have learned a lot from the Little Professor had he ever taken the time while he was with the Red Sox.

Since Dom was never associated with the Rangers I decided to post a card of one of his former teammates. Here we see the late Ted Williams on card number 510 of the 1972 set.
Posted by Spiff at 12:16 PM