Ugly, and the game wasn't pretty either. 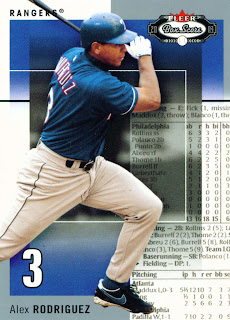 Alex Rodriguez and the Yankees made their first appearance in Arlington since A-Rod admitted his steroid use. The crowd greeted him with boos when he was introduced and every time he batted. Alex apparently didn't let it bother him as he went 5-for-5 with two doubles and four RBI.

Ugly, but not near as much as the rest of the game. The Empire manhandled Texas pitching while the Rangers' offense was never able to get off the ground.

Nelson Cruz was the lone bright spot for Texas with a home run in the ninth to avoid the shutout. He was also the most dangerous Ranger hitter, going 2-for-4.

Well, every team has to suffer a blowout on occasion. Now that we have that out of the way perhaps the bats and pitching will get back on track. The next two games would be an opportune time.
Posted by Spiff at 5:37 PM

I thought for sure the ugly reference was going to be to the hats being worn today.

You're 100% right. Better that a loss like this happens in May as opposed to September. I'd rather they get hammered than lose by one run.