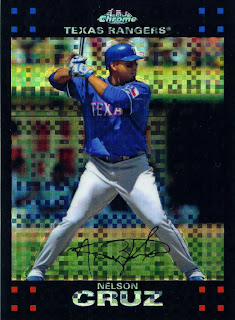 Texas took the second game of the 2009 Silver Boot series from Houston today. Nelson Cruz added two more homers and four RBI to his season total. That performance, coupled with his tenth inning home run to win yesterday, garners Nelson today's card. Here we see him on his 2007 Topps Chrome Xfractor card, number 241 in the set.

In addition to Nellie being hot, the Rangers also got some good pitching from Scott Feldman and the bullpen. This gives Scooter his third win since breaking into the rotation earlier this season. More timely hitting from Blalock and Vizquel also contributed to the win. David Murphy seems to be shaking the last vestiges of his slump off as well.

I was sitting down in front of the computer yesterday to watch the game numbers come in when my wife surprised me with an early anniversary gift. She had subscribed to the Game Day Premium on MLB.com. This allows me to listen to the Rangers games either as they occur or on delay. Just in time for my weekend off and the Houston trip. Needless to say, I am very thrilled about it. Having the Rangers in contention is just icing on the cake.
Posted by Spiff at 7:38 PM

What did you think about that homer Tejada had in the first inning?

Nelson Cruz tried to blame a fan for missing the ball. I don't know the guy (the fan) but I've been friends with his wife for about 35 years.

I haven't seen the replay of the home run. The Rangers' announcers seemed to think that the fan probably did interfere but that it was close enough to go either way.

So long as he wasn't leaning over the wall I figure it isn't a big deal. Once it's in the stands either the player or the fans can get it as far as I'm concerned.