Padilla to DL - Hamilton, Francisco back. 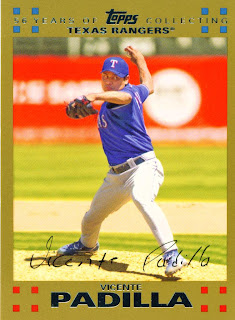 Vicente Padilla, seen here on his 2007 Topps Gold card numbered 558/2007, is on the DL as of yesterday. Apparently he tweaked his left shoulder taking batting practice.

That leaves tonight's start in Houston up to rookie Derek Holland. This will be Derek's first start in the major leagues. He is a starter but has been in the bullpen since coming up earlier this season. Holland's last appearance was his melt down against the Angels in Arlington. So far he seems to be doing better tonight, no runs in four innings so far. Hopefully he can keep it up.

Padilla may be gone but Frank Francisco is back from the DL and available for tonight's game. Josh Hamilton is also back. He started in center field tonight.

Andruw Jones started at first base, his first ever start at that position in the Big Leagues. Apparently Ron Washington decided that Jones' bat in the lineup was worth more than Chris Davis or Hank Blalock at first. Andruw has an RBI so far so it seems to be working thus far.
Posted by Spiff at 7:47 PM