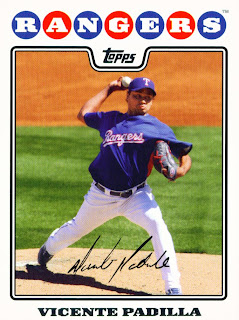 Difficult task today to decide which card to feature. There have been several guys who have kept things going for Texas the past two days against Seattle.

Last night it was Frank Francisco closing the deal and Elvis Andrus making a highlight reel play to save Kevin Millwood's bacon.

Tonight it was a tenth inning rally sparked by Andruw Jones' two out single and capped by Jarrod Saltalamacchia's grand slam. Six runs in the tenth inning on one out. Wow!

I decided though to post a scan of Vicente Padilla's 2008 Topps card, number 659 in the set. Padilla didn't get the win tonight but he deserved to. He went eight innings while giving up only one hit and one run. Nice to see that kind of pitching. Gives the bullpen a rest and is what you need in order to compete. In this case it helped the team pick up a game on the Mariners. Now they are just a half a game out of first as they head to Oakland for a visit.
Posted by Spiff at 7:18 PM