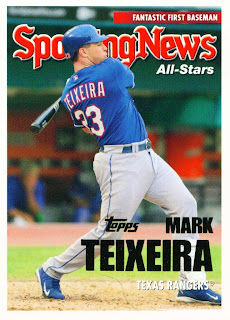 The Rangers need to recover from last night and hammer the Yankees. Kevin Millwood takes the mound this evening to try and stop Mark Teixeira, seen here on card #UH147 of the 2005 Topps Updates and Highlights set, and the rest of the Yanks.

Speaking of Mark Teixeira, are there any Rangers fans out there who miss having him on the team? I know I don't. Chris Davis is just about as good defensively and seems to be a lot better in the clubhouse. Hopefully his offense can catch up. Even if it doesn't, there is a lot to be said for a team that plays as a team, not as a bunch of prima donnas who happen to wear matching clothes.

Anyone think that the team got the short end of the trade that sent Tex and Ron Mahay to Atlanta? With Jarrod Saltalamacchia, Elvis Andrus, Matt Harrison, Beau Jones, and Neftali Feliz coming in return, I am thinking that the Braves got scalped. Twice at least. Once by the Rangers and then by Teixeira himself when he refused to consider re-signing with them and forced a second trade.

Statistically teams who are in first on Memorial Day have a 60% chance of making the post-season. Are the Rangers in that 60% this year?

Jim Sundberg and Rusty Greer will represent the Rangers at this year's draft. I can't find anything on players the team might be looking at. Anyone have more information?

Quick programing note. The next two weeks I am working a bunch of mandatory overtime so my posting may be infrequent. I will make my best effort to continue daily posting but if I am unable to at least you know there is a reason.