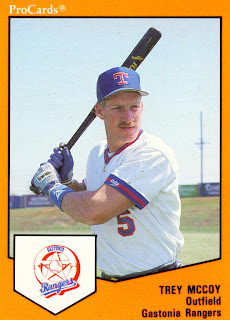 So the Rangers seemed to have shored up their bullpen just at the trading deadline. Don't really know enough about the two prospects they gave up to get Mike Adams but I am glad they got him instead of Heath Bell.

Since I really can't analyze the trade and since I have no other ideas for a post it's time to take another look at the past down on the farm.

Today we see Trey McCoy on card number 1012 of the 1989 ProCards set. Trey's legal name is Homer Claude McCoy. Think I might go with Trey if I were him. Trey was the Rangers 9th round selection in the 1988 draft and played that year for Butte in Rookie ball. McCoy's .357 batting average and .458 on-base percentage is what probably got him promoted to Single A for the 1989 season.

In 1989 Trey would get 549 plate appearances in 130 games for the Gastonia Rangers. His batting average would drop to .280 and his on-base percentage to .377. Both drops were significant but not fatal. Trey's strikeouts rose to 81 but his walks also went up to 72. Those numbers really aren't that bad considering that he was developing into something of a power hitter. In 1989 he had 18 home runs, two triples, and 31 doubles. He also knocked in 89 RBI.

All in all 1989 hadn't been a bad season for McCoy. As a ninth round draft pick he probably wasn't expected to rocket through the minors. His offense had dipped a bit with his promotion and he needed to work on his defense. Probably for those reasons he would start the 1990 season by returning to Gastonia for more work and seasoning.
Posted by Spiff at 8:55 PM