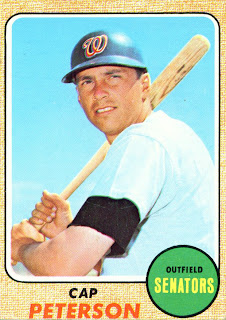 Cap Peterson, seen here on card number 188 of the 1968 Topps set, was the Senators' backup corner outfielder that year. Cap primarily backed up Ed Stroud in right field, putting in 325 innings on that side. He also played 101 innings in left. With appearances in 94 games he was the most used player on the bench for Washington in 1968.

In that combined 426 innings in the field Cap saw 84 chances. He handled all 84 without an error. His 1.000 fielding percentage was 19 points higher than the league average. Nice to see in a backup.

Peterson made 248 trips to the plate in 1968. He managed 46 hits and 18 walks for a .262 on base percentage. His .204 batting average barely cleared the Mendoza line. Cap did score 20 runs for Washington (best on the bench) and accrued 18 RBI. Three of his hits were home runs.

Cap wasn't really a threat at the plate but he wasn't a pushover either. His excellent fielding combined with the ability to occasionally sting on offense made him a good backup.
Posted by Spiff at 2:26 PM