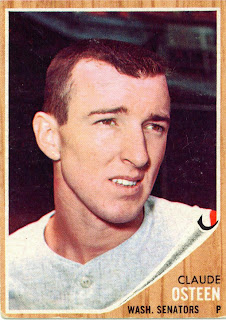 Future Rangers pitching coach Claude Osteen appears here on card number 501 of the 1962 Topps set. Washington had picked Claude up from Cincinnati in September of 1961 in exchange for Dave Sisler. It was an excellent move by the Senators.

The back of Claude's card says that he "has good stuff and should be a big winner." The winning was in the future but Osteen showed his stuff in 150.1 innings he pitched for the Senators in 1962. His 8-13 record did not do him justice. Primarily a starter, "Gomer" would kick off 22 of the 28 games he appeared in. Seven times he went all nine and twice he tossed shutouts.

Osteen posted a 3.65 ERA, about average for the Washington rotation. His 1.244 WHIP led the pitching staff though and would have been even lower if he could have shaved off some walks. Of course the 47 that he issued was still third lowest on the staff. He also struck out 59 of the 626 batters he faced.

1962 had been Claude Osteen's arrival season. For the first time he had thrown over 50 innings in a season at the Major League level. He had also made more starts than relief appearances for the first time in his career. The 22-year-old left-hander hadn't wasted his chance at the Big Show. Unless something changed he was a lock for the starting rotation in 1963.
Posted by Spiff at 12:09 PM