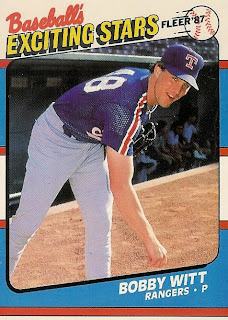 With yesterday an off day it seems like as good a time as any to look at number 27 on T.R. Sullivan's list of the Top 50 Seasons in Rangers history.

Bobby Witt, shown here on card number 44 of the 1987 Fleer Baseball's Exciting Stars set, was the Rangers first round draft pick in the 1985 draft and the third pick overall. The franchise had high hopes for him to be a power starter.

In 1990, after several less than impressive seasons, it looked as if Witt might have finally arrived. He started 32 games, completed seven of them, and won 17. All those numbers were team bests.

In his 33 appearances Witt pitched a staff high 222.0 innings while striking out 221, second only to Nolan Ryan. He posted a career best and best in the rotation 3.36 ERA and a 1.383 WHIP, second best in his career. Of course, he still walked 110 batters but control problems were common with Witt by this time.

Riding Witt's performance along with strong seasons turned in by Ryan and Kevin Brown, the Rangers finished the season in third place in the American League West (remembering there were only two divisions in each league at the time).

It seemed like Bobby was finally all the Rangers were hoping for. Unfortunately, he would tear his rotator cuff the following season and never again approach his 1990 numbers.
Posted by Spiff at 2:18 PM