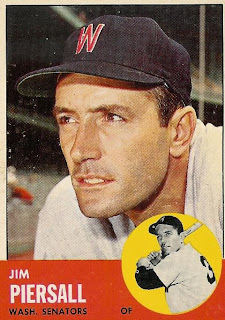 Up today is Jimmy Piersall on card number 443 of the 1963 Topps set. Piersall was entering his second season with Washington in the Spring of 1963. His 1962 season had been a mixed bag and he really needed to get his bat going along as well as keep up his defense in 1963.

Piersall's defense picked up where it left off at the end of 1962. In 199.1 innings in center field he handled 68 chances without an error. His range also continued to be significantly above the league average.

Unfortunately, Jimmy's offense also picked up where it left off. In 104 plate appearances he posted a .245 batting average, one point higher than the previous season. His .284 on-base percentage was a 17 point drop and his .287 slugging percentage was 42 points lower.

These were not good numbers at the plate for Piersall. Offensively he was trailing the other three Washington outfielders, Don Lock, Chuck Hinton, and Jim King in just about every category. That made him expendable. On May 23, 1963 the Senators traded Jim to the New York Mets for Gil Hodges. Hodges wouldn't play a single inning for Washington, they wanted him as a manager.
Posted by Spiff at 8:38 AM