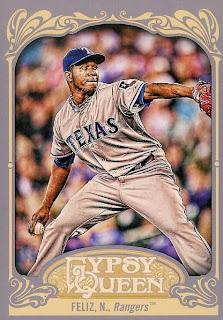 Time for number 26 in T.R. Sullivan's list of the top 50 seasons in Rangers history. Up today is Neftali Feliz with his 2010 campaign.

Feliz, shown here on card 189 of the 2012 Topps Gypsy Queen set, was a rookie in 2010 and was slated to work out of the bullpen with the idea of eventually working him up to starting. Frank Francisco was supposed to be the closer coming out of Spring Training. Feliz was to have time in middle relief to ease into facing Big League hitters.

It didn't take long for that scenario to fall apart as Francisco melted down several times in the early going then went on the disabled list. Suddenly the young rookie Feliz found himself in the closer role in early April.

He responded well to the pressure by compiling a 2.73 ERA and a 0.880 WHIP in 69.1 innings pitched over 70 appearances. Neftali finished a league-leading 59 games and saved 40 of them. He struck out 71 batters and walked just 19 (that includes one intentionally). All in all he was simply dominant.

Feliz went to the All-Star game, the postseason, and the World Series in his rookie year. He also won the American League Rookie of the Year. Pretty fitting recognition for an outstanding performance.
Posted by Spiff at 11:44 AM