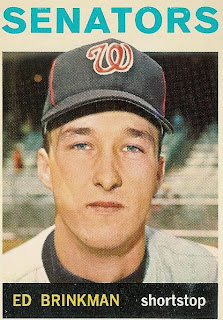 Ed Brinkman, shown here on card 46 of the 1964 Topps set, was entering his second full season as the Senators first-string shortstop in 1964. Looks from the photo on the card like Ed was strangely unimpressed by the situation.

Ed would see action in 132 games during the season and make 482 plate appearances. He compiled a .224 batting average and a .271 on-base percentage. Those numbers made Brinkman the lightest hitting Washington regular. Occasionally though, he could hit for power. Over the course of the season he would end up with 20 doubles, three triples, and eight home runs. Still made for an offensive lightweight.

Brinkman played shortstop in 125 games for a total of 1061.1 innings. He handled 598 chances while committing just 19 errors. That gave him a fielding percentage of .969. While that was only one point higher than the league average it was significantly better than any other Senators starter other than Don Blasingame over at second base.

In his third season in the Big Leagues Ed Brinkman had already set a pattern of slick defense and next to no offense. Due to a lack of competition he was fine for the foreseeable future. If he wanted to lock things down long-term though he would be best served by improving his skills as a batsman.

...which he did, once Ted Williams became the Senators' manager in 1969. Brinkman hit much higher than his career average while under Teddy Ballgame's tutelage.

After Brinkman was traded to the Tigers (and away from Williams' influence), he returned to his weak-hitting ways.