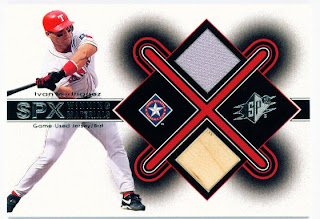 OK, this 2001 SPx Winning Materials card of Ivan Rodriguez has nothing to do with last night's win. It's Thursday though, time for a game-used or autograph card and I'm running short on both for the current roster. If you're interested in helping me out in this area let me know. I have a few game-used and autos for trade of various players and still quite a few for Pudge's non-Ranger years.

On to last night's game. Game two of a home series against the Milwaukee Brewers. Game one ended the Rangers win streak and new Ranger Matt Garza took the hill to try and start a new run. Things didn't go well for Garza and he left the game midway through the sixth inning trailing 4-2. I figured Oakland had an excellent chance to move back into a tie for first place since the Texas offense was struggling with Milwaukee rookie Tyler Thornburg.

Thornburg left the game after the sixth inning and things took a turn for the better once the Brewer bullpen took over. Texas managed to put together a three run rally in the seventh. The Ranger bullpen was great and Joe Nathan picked up his 36 save. Final: 5-4 Rangers.

Couple of items of note. Leonys Martin gunned down two runners at third base when they tried to run on him. That gives Martin 10 outfield assists on the season and moves him into the category of an outfielder you want to hesitate to run on. Speaking of running, Texas kept the running game going with two more stolen bases, one by Craig Gentry and one by Alex Rios. Good to see Gentry still running and Rios swipe a bag. The more speed in the lineup the more pressure on the opposing pitching and defense.

Meanwhile the Astros pulled off a second consecutive win in Oakland, this one in extra innings. That gives Texas a two game cushion in the American League West. Things are looking good for the Rangers. Hopefully they can keep rolling during the final quarter of the season and stay on top of the A's.