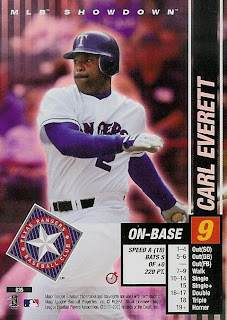 Time for another look at TR Sullivan's list of the Top 50 Decisions that shaped the Texas Rangers. Today we come to number 31 on the list - Going for Broke.

On January 26, 2001 the Texas Rangers signed shortstop Alex Rodriguez to a ten year deal. The signing was at odds with the youth movement the team was engaged in at the time but the club had suffered through a losing season in 2000 after appearing in the post-season in 1999. Owner Tom Hicks wanted to get back to winning and buying talent seemed to be the faster track than growing it.

2001 was not the return to winning the Rangers wanted. Manager Johnny Oates lasted just 28 games and the team ended up with only two wins more than the previous season. Time was ticking on the Rodriguez contract and management needed to justify the money involved. Winning now seemed to be the best option.

Overboard went the youth movement. In came veterans through trades and signings. Carl Everett, shown here on card 35 of the 2002 MLB Showdown Trading Deadline set, Chan Ho Park, John Rocker, Todd Van Poppel, Ismael Valdez, and Hideki Irabu all arrived during the off-season via trade or free agency. Former Ranger Juan Gonzalez returned as a free agent signing. It was one of the most extension re-workings of the Texas roster in team history. It also effectively ended the youth movement by blocking or trading most of the young prospects.

As might be expected, the moves didn't work. In 2002 the team lost one more game than they did in 2001 and remained in the American League West cellar. Manager Jerry Narron lost his job as did several of the new arrivals. Park was about the longest-tenured of the acquisitions, lasting until 2005. Texas didn't get much in return for any of the departures.

It was time to get back to the drawing-board and restart the youth movement. That would take some time though and, with the exception of 2004, the team remained stalled out at sub-.500 play until 2009. Tom Hicks never did get his championship and set the franchise hopes back almost a decade. Turned out the shortcut really wasn't.
Posted by Spiff at 4:27 PM