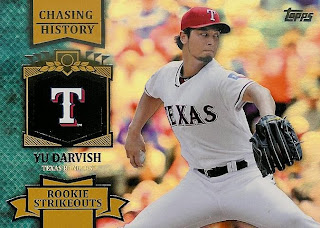 So the Rangers were in Houston last yesterday and Yu Darvish was on the mound. Sounds like April all over again. Just like in April, Darvish flirted with history. He didn't make it quite as close as he did then but he got close.

Darvish had a perfect game going until a walk in the sixth inning. That resulted in the loss of his perfecto and catcher A.J. Pierzynski. A.J. got tossed for arguing balls and strikes on the at-bat that ended in the walk.

The change of catchers didn't faze Yu though and he continued on his way. It wasn't until after one out in the eighth inning that he made a mistake and saw a ball hit. That was the end of the no-hit bid and the end of the shutout since the hit was a home run. Darvish finished the eighth and then gave way to Joe Nathan in the ninth for the save.

Nathan was perfect to keep Houston limited to one hit and pick up the save. Yu got the 2-1 win to run the Rangers win streak to eight games. He also picked up 15 more strikeouts on the season. The Rangers stay one game ahead of the A's in the American League West. Fun stuff there.

Guess it was fitting that I finally broke down today and bought some 2013 Topps base cards. In the pack was this Chasing History #CH-80 commemorating Darvish's rookie season and his chase of Herb Score's American League rookie strikeout record. Darvish didn't catch Herb on that score but it is looking more and more like he will way surpass him in career totals. I have to say that I am glad Texas has him locked down for several more years.
Posted by Spiff at 7:12 PM