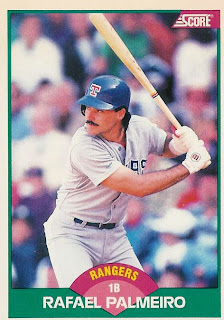 Time for another excursion into T.R. Sullivan's Tops Fifty decisions that made the Rangers. Up to number 32 on the list.

The 1988 winter meetings were in Atlanta, Georgia. Texas General Manager Tom Grieve went with the intention of doing some dealing. He was able to make two headline trades.

On December 5, 1988 Grieve pulled off a trade for first baseman Rafael Palmeiro. Pitchers Jamie Moyer and Drew Hall came along as well but Palmeiro, shown here on card 1T of the 1989 Score set, was the centerpiece of the deal. A couple of minor leaguers and four Rangers, including Mitch Williams and Curt Wilkerson, went to the Cubs in return.


On December 6, 1988 Grieve snagged second baseman Julio Franco from the Indians. In return the Tribe got Jerry Browne, Pete O'Brien, and Oddibe McDowell.

What was significant about these two trades was the change of direction they signaled for the club. The Rangers were about to go big-gun offense. The July, 1989 trade for Harold Baines further solidified the change in philosophy. By the end of 1989 the Rangers scored 58 more runs than in 1988. The team also increased their home run totals by 10.

Within a few years Dean Palmer, Juan Gonzalez, and Ivan Rodriguez would become key components in the Texas offense. For the next two decades the Rangers would try to bomb their way to the World Series.

Not that pitching was totally ignored, Texas did sign Nolan Ryan on December 7, 1988. However, it wasn't until the arrival of General Manager Jon Daniels and the departure of owner Tom Hicks that pitching would again carry as much weight in Arlington as slugging.
Posted by Spiff at 9:43 AM