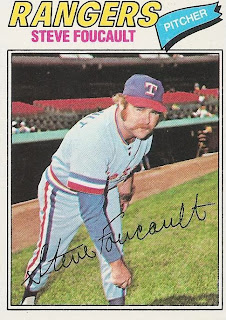 Steve Foucault makes his final appearance as a Texas Ranger on card 459 of the 1977 Topps set. By the time collectors were pulling this card from packs Steve was part of the Detroit Tigers. Texas sent him to Detroit on April 12, 1977 in return for Willie Horton.

Foucault's standout year with Texas was 1974. Manager Billy Martin probably overused his arm that season and he was never able to get back to that level again. After the trade he would play two more seasons in the Majors before hanging up the spikes after the 1978 season.
Posted by Spiff at 11:28 AM