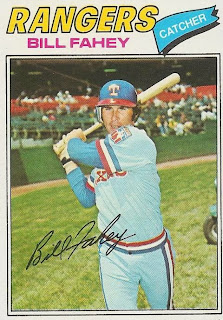 Sorry about missing Topps Tuesday last week and posting a different theme. I must not have been thinking clearly at the time. Going to go to Bill Fahey on card 511 of the 1977 Topps set to get back on track.

Despite remaining healthy in 1976, Fahey did not get a real shot at the Rangers starting catcher spot. Jim Sundberg pretty much had that nailed down. Fahey ended up splitting the backup duties with John Ellis.

Bill would fill in for Jim Sundberg in parts of 34 games. In 186.1 innings he flawlessly handled 109 chances for a 1.000 fielding percentage. He also allowed no passed balls. That was pretty good. Where the difference began to show was that teams ran on Fahey. He caught just four of the 22 players who ran on him. That 18% of caught stealing was well below the league average and far below Jim Sundberg's numbers.

Fahey also made 72 trips to the plate in 1977. His .221 batting average and .232 on-base percentage were both significant drops from the previous season.

Bill Fahey's 1977 season followed the now familiar pattern of backing up other catchers. The drop in offense was a concern though. If Bill wanted to be backing up Jim Sundberg in 1978 he had better figure out how to patch the holes in his bat.
Posted by Spiff at 12:07 PM