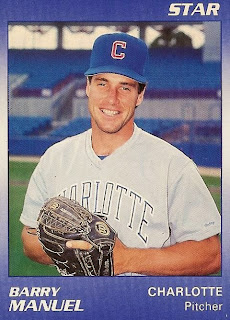 Barry Manuel, shown here on card #12 of the 1990 Star Charlotte Rangers set, was drafted by Texas in the second round of the 1987 draft. In spite of any real impressive numbers, he was promoted up to Double A by the end of 1989. There his performance caught up with him. He was sent back down to A+ Charlotte for the 1990 season.

Barry made 57 appearances for Charlotte in 1990. All of those were out of the bullpen and he finished 56 of the games he pitched in. Over 56.1 innings he posted a 2.88 ERA and a 1.225 WHIP. While he had a lower ERA with Charlotte in 1988, Manuel's WHIP was the lowest of his professional career. The experiment of converting him from a starter to a reliever seemed to be right on track. That's probably the reason for the smile on his card.

Based on his improved numbers, Manuel would start the 1990 season back at Double A Tulsa. He had his second chance, now he just needed to make good on it and complete the climb to the Bigs.
Posted by Spiff at 7:45 PM