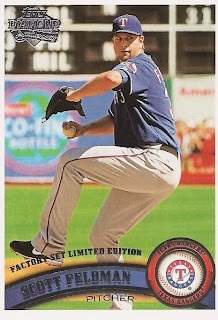 Been a slow couple of days on the Rangers front. Fits with the icy conditions on the local roads. Also fits with the flu that has been tearing through my house. Sorry about the lack a post yesterday. I got this 2011 Topps 60th Anniversary Factory Set #498 scanned but then the flu and the slow Internet (probably due to the weather) caught up with me.

Anyway, Texas announced yesterday they have signed catcher J.P. Arencibia to a one-year contract worth about $2 million. The plan is for Arencibia to serve as a backup to Geovany Soto next season. It seems the club doesn't want anyone blocking Jorge Alfaro when he's ready for the big time.

In other news, former Ranger pitcher of the year Scott Feldman, shown on today's card, signed a three year contract with the Houston Astros. That means Texas will be seeing him several times throughout the season.

Former Ranger catcher Mike Napoli is headed back to the Boston Red Sox. Nap and the BoSox worked out a two-year deal.

Well, hopefully the roads and my head will clear up in the next day or two so I can get back to normal life and normal posting.
Posted by Spiff at 12:44 PM