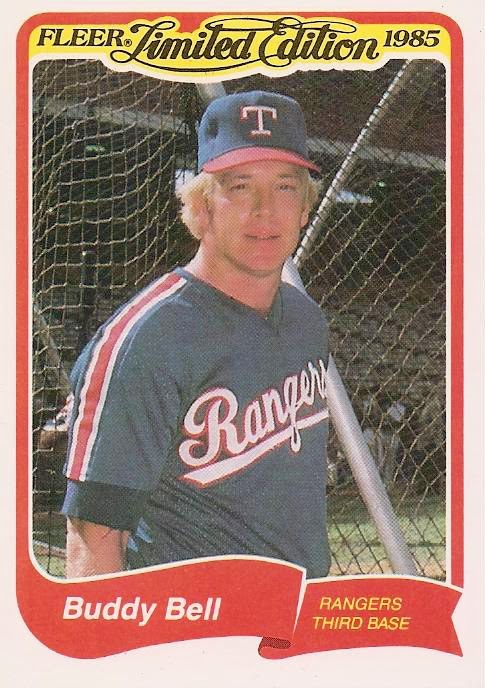 Working our way rapidly through T.R. Sullivan's list of the Top 50 Seasons in Rangers history now that the winter has quieted down for Texas.

Coming in at number 34 is Buddy Bell, shown here on card number 1 of the 1985 Fleer Limited Edition set. Bell makes the list on the strength of his 1979 season.

In his first season with Texas, Buddy played in a league-leading and career high 162 games. That gave him a career high 720 plate appearances. He took advantage and posted a .299 batting average and a .327 on-base percentage. Neither were career bests but his 200 hits were. So were his 42 doubles, 89 runs scored, and 101 RBI. His 18 home runs were within two of a career high.

In the field Bell had a significantly higher range factor than other third basemen. He committed just 15 errors in 495 chances over 1210.2 innings. That gave him a .970 fielding percentage, that was 16 points higher than the league average at third.

Bell had amazed in his first season for Texas. He earned a Gold Glove and MVP consideration. He also started to build his reputation as possibly the best defensive player outside of catcher to ever suit up for Texas.
Posted by Spiff at 12:03 PM

I think Bell is the last player to have 200 hits in a season and not hit over .300. In fact, he may be the only one. I'll have to look that up. What that means is that he hit a lot, but walked very little.

Found this. None until 1935 and them these players did it -