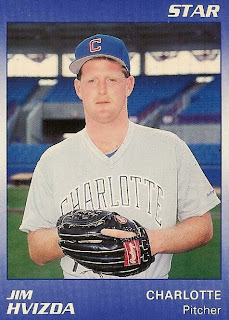 Coming off a stellar 1989 season at Gastonia, Hvizda started the 1990 season at A+ ball. He pitched a total of 28.2 innings in relief over 13 games for Charlotte. He made quite the impression with his 1.57 ERA and 0.907 WHIP. That impression was enough to earn a mid-season promotion to Double A.

While finishing out the season with the Tulsa Drillers, Jim appeared in 32 games, again all in relief. In the 43 innings he pitched he posted a 3.77 ERA and a 1.419 WHIP. Those were significant performance drops over his time with Charlotte and Gastonia.

Apparently the change in performance with the promotion was enough to give the Texas front office pause. 1990 would be Hvizda's last year in the Rangers minor league system. He ended up with the Brewers Single A club in 1991 and then hung it up.
Posted by Spiff at 3:36 PM