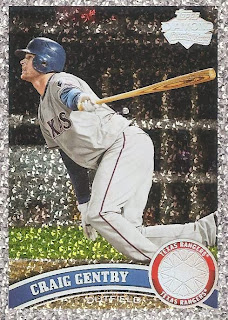 Well, the Rangers made another move yesterday and the result is that Craig Gentry, shown here on card US17 of the 2011 Topps Diamond Anniversary set, will not be on the team in 2014. Texas dealt Gentry and pitcher Josh Lindblom to the Oakland A's in exchange for outfielder Michael Choice and middle infielder Chris Bostick.

Going to miss Gentry. He is a good defensive player with great speed on the bases. I like those types of players and could handle the fact that his bat can be a bit soft at times. I was looking forward to him getting a little more playing time this coming season. At least that's likely for him with Oakland.

Lindblom is probably not going to be greatly missed unless the Athletics turn him into a real mean machine. Coming over in the Michael Young trade, he just never stuck with the Rangers. Spent most of last season at Triple A.

From what I read, Michael Choice was the number two prospect in the Oakland system. He's supposed to be an average defender able to play all three outfield spots with a bat rapidly developing into a serious threat. He got a look by the A's last season. Texas is looking at him to earn a starting job for 2014 and possibly hit in the middle of the lineup.

Chris Bostick was ranked as the 17th top prospect in the A's system. He's never played above Single A and is a long way from the Majors. He has the potential to develop though and could be a name to remember for the future.

Obviously Choice and Gentry were the two big names in the deal. Texas clearly traded speed for power. I asked my A's fan brother what he thought. He was excited to see Billy Beane replacing Seth Smith in center field and thought Lindblom was worth a gamble. He had never heard of Michael Choice or Chris Bostick. I wasn't surprised Bostick wasn't being talked about. Choice was another matter. Texas usually talks about their top two or three prospects. Maybe Oakland doesn't.

Going to be interesting to see how this all turns out. Texas is looking at a lot of young kids taking the field next year. That could be good or could cause an implosion. A lot of it will depend on how well the veterans in the clubhouse handle the transition.
Posted by Spiff at 11:14 AM