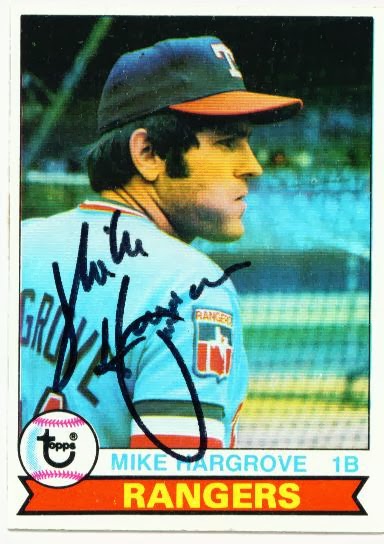 Mike Hargrove is a tough through the mail signer. He's developed a reputation of not signing. Cards sent to him just disappear. I'm not sure why that's the case now. I sent him this 1979 Topps card on September 21, 2008. It came back signed on October 30, 2008. While I don't know the reasons behind Mike no longer signing I do appreciate him taking the time to sign this card.

Number 42 on T.R. Sullivan's list of the Top 50 Seasons in Rangers history goes to Mike Hargrove for his rookie year in 1974. Coming from A ball to Spring Training, Hargrove made the team at the insistence of manager Billy Martin.

Martin would sent Hargrove to the plate 477 times throughout the season. Mike responded with a .323 batting average and a .395 on-base percentage. He scored 57 runs and knocked in 66 RBI while hitting 18 doubles, three triples, and four home runs. His .987 fielding percentage was slightly lower than the league average but you have to expect some rough edges from a player who was just jumped two levels and thrust into a pennant race.

Folks outside of Texas took note of Hargrove's season. He won the American League Rookie of the Year award. That was a first in Rangers history.
Posted by Spiff at 12:07 PM