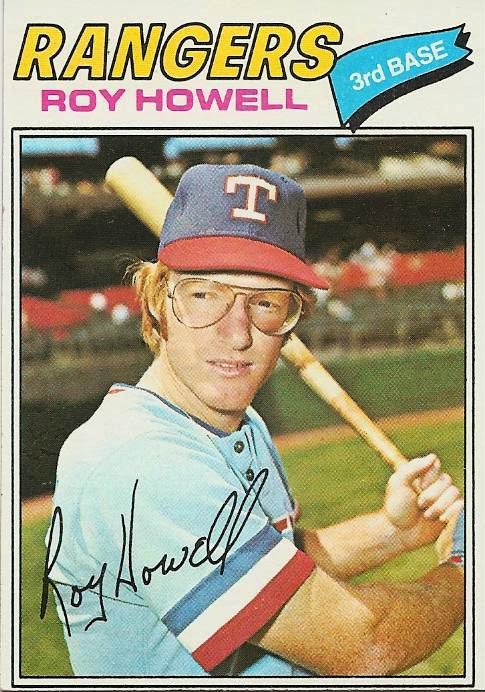 Coming into Sprint Training in 1977 it was painfully clear that Roy Howell, shown here on card 608 of the 1977 Topps set, was a man without a job. The Rangers tried in 1975 and 1976 to install Howell at third base but he just wasn't clicking. His bat was too inconsistent and his glove had too many holes.

The off-season signing of shortstop Bert Campaneris is what endangered Howell. To make room in the middle for Campy, Texas moved star Toby Harrah to third base. There was no comparison between Harrah's bat and Howell's. That left Roy without a home.

There was some talk of trying Howell in left field. The outfield was in transition and there was a slight possibility Roy might be able to sneak in and grab a job there. Claudell Washington got left nailed down though and between Ken Henderson and Tom Grieve, the chances of sticking as a backup outfielder were slim.

Roy went into the 1977 season as a utility player with no particular position. He ended up appearing at third, first, left field, and as the designated hitter. He did fairly well on defense. The problem was his bat. Whether it was not having a settled position or just a continuation of his previous struggles, by seven games into the season it became clear that Roy Howell could not make contact at the plate. He was carrying a .105 on-base percentage and hadn't collected a hit in his 19 plate appearances.

In November of 1976 the Toronto Blue Jays grabbed reliever Steve Hargan from the Rangers in the expansion draft. Apparently the Rangers decided Hargan was more valuable than the struggling and jobless Howell. On May 9, 1977 Texas sent Roy to the Jays. Amazingly the Rangers got not only Steve Hargan but also Jim Mason and $200,000. Roy Howell got a new lease on life as a Major League ball player and another shot at playing third base every day.
Posted by Spiff at 12:33 PM