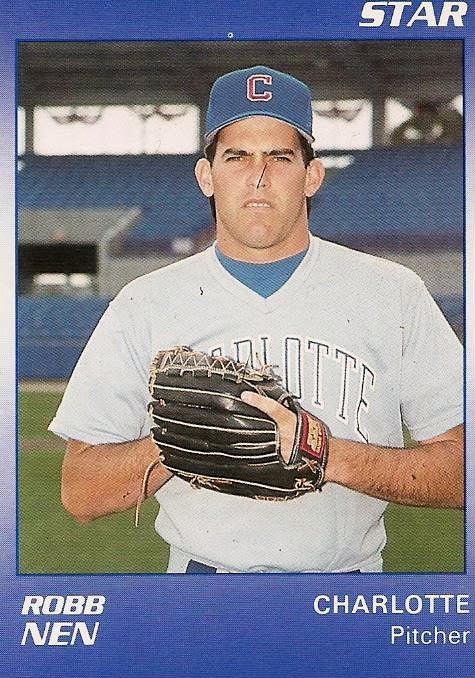 Well, Rangers pitcher and catchers reported yesterday. So far no word except there are players in Surprise and figuring out who will replace Derek Holland in the rotation seems to be at the top of everyone's list. Guess it's fitting that today's minor league card is of a pitcher.

No, my scanner is not dirty. What looks like spots on the glass and maybe a small hair on Robb Nen's face are actually imperfections on card #15 of the 1990 Star Charlotte Rangers team set. That and the mis-cutting of the card (along with about half the rest of the set) seems to fit in with the lower levels of the minor leagues.

Nen, the son of former Senator Dick Nen, was the Rangers 32nd round draft pick in the 1987 draft. He was nobody's top prospect. By 1990 he had worked his way through Rookie and A ball and was ready to start the season with A+ Charlotte.

Robb made eleven starts for Charlotte in 1990. That account for all his appearances. In the 53.2 innings he pitched he managed to put together a 3.69 ERA and 1.491 WHIP. He struck out 38 and walked 36. Decent numbers but he wasn't blowing the doors off the league.

Nen must have caught someone's eye. He was promoted mid-season to Double A Tulsa. With the Drillers his numbers took a predictable dip. In seven starts he was tagged with a 5.06 ERA and 1.650 WHIP over 26.2 innings.

That was to be expected though. The batters were better at Double A and an adjustment period is normal for young players moving up the ladder. Robb Nen just needed to make sure he made that adjustment and brought his numbers back down in the 1991 season.
Posted by Spiff at 11:04 AM