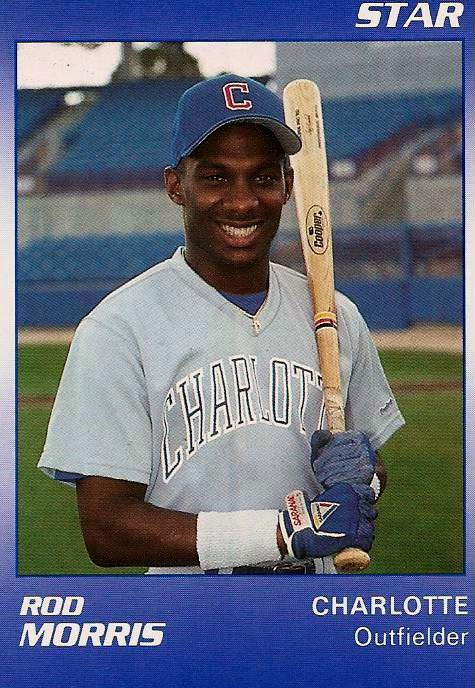 Rod Morris, shown here on card number 14 of the 1990 Star Charlotte Rangers team set, was a long shot for the Rangers. Not that Morris was a poor risk but any 25th round pick is a long shot.

After being drafted in the 1988 draft, Rod embarked on his professional career. One season with the Butte Copper Kings in 1988 and then it was on the Charlotte for 1989. He stayed with the team when it moved from A ball to A+ ball for the 1990 season.

Morris played in the outfield for 116 of the 120 games he appeared in for Charlotte. Not sure which outfield position he primarily filled. He muffed five of the 218 chances he had for a .977 fielding percentage. That was a 13 point improvement over the 1989 season but he still had room to improve further.

Rod also made 492 plate appearances for Charlotte in route to a .255 batting average and a .320 on-base percentage. His 11 doubles, four triples, and two home runs indicated he had a touch of power but was not a slugger. Speed was perhaps more Morris' game, he stole 18 bases in 28 attempts.

Apparently Texas decided Morris could be taught how to read a pitcher and improve his stealing along with his bat. He would find himself promoted to Double A Tulsa for the beginning of the 1991 season.
Posted by Spiff at 6:23 PM