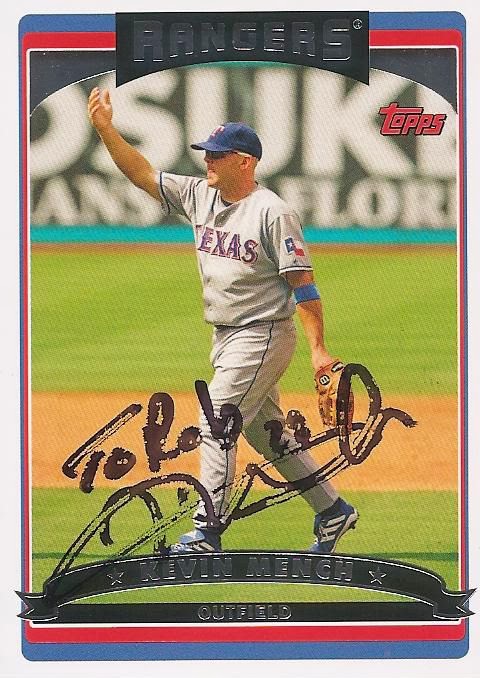 I'm still sending out through the mail autograph requests. I took a break while moving but have sent several since. Since the Rangers FanFest I found some more addresses for retired players and out went another group.

Kevin Mench was in that group. I sent him two cards, including this 2006 Topps, on February 17th. He signed both and sent them back. I got them in my mailbox yesterday. He took the time to personalize both. The bubbling on this one makes it the lesser of the two but I'm glad to have it as well. Many thanks to Mr. Mench for his time and consideration in fulfilling my request.

In addition to Mench, I have received several other successes recently. Cards have come back signed from former Rangers Jim Umbarger, Rusty Greer, Oddibe McDowell, George Wright, Jon Matlack, and Dave Hostetler. Former Washington Senator Del Unser was also kind enough to return my card signed. Thanks to all these gentlemen for taking the time to sign for a fan. On the down side, I received RTS from former Rangers Mike Venafro and Geno Petralli. I still have quite a few requests out so some more may come in. I am also stockpiling stamps and extra cards of current players for when the season starts. I've never been that big on sending to Spring Training.

Anyone else out there having autograph success you want to share?
Posted by Spiff at 11:34 AM

Bummer for the bubbling. I caught a Mench foulball at a game once. I have it displayed with the ticket.