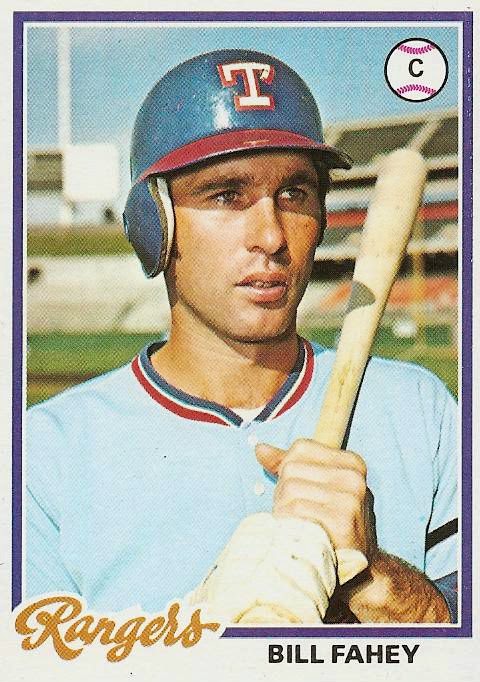 Well, the long dark 2014 season is over for the Rangers. Time to watch the post-season and think about next year. I'll have some posts on both coming up but for today it's time for another look at the 1978 team.

Bill Fahey, shown here on card 388 of the 1978 Topps set, found himself holding the short end of the stick in 1978. The battle between him and John Ellis for the backup catching spot ended with Ellis getting the nod and Fahey getting a ticket to Triple A Tuscon.

Bill played in 66 games for the Toros and made 241 plate appearances. He ended the season with a .250 batting average and a .319 on-base percentage. Those are not numbers calculated to compel a call-up. His defense remained acceptable but that hadn't been the problem in 1977 either. Bill's bat, or lack thereof, is what got him sent to the minors for the 1978 season.

Taking stock at the end of 1978, the Rangers apparently didn't see much of a future for Fahey in Texas. Jim Sundberg had the starting catcher's gig locked up and John Ellis was serviceable as the backup and more versatile than Fahey since he could play first base as well. That made Bill expendable.

On October 25, 1978 the Rangers traded Fahey along with Kurt Bevacqua and Mike Hargrove to the Padres for Oscar Gamble, Dave Roberts, and $300,000. In 1979 and 1980 Fahey would get far more playing time with the Padres than he ever got with Texas.