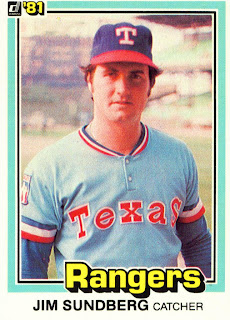 So, most of the news out of the Rangers Spring Training camp is about Yu Darvish's outing earlier today. So far I'm glad the Rangers got Darvish and I'm glad he's working out. Hopefully he will be lights out all year long. Having said that, I have no Darvish cards and nothing much to add to what is already being said.

In place of Darvish we come to number 17 on T.R. Sullivan's Top Fifty Seasons in Rangers history. Jim Sundberg appears there and on card number 385 of the 1981 Donruss set.

In 1977 Jim Sundberg was entering his fourth Big League season. The Rangers were a young team that had finally jelled. They would go on to win 94 games while coming in second in the American League West. Sunny was a big part of that success.

Jim appeared in 149 games for Texas and caught 1,214 innings. He committed just five errors all season for a .994 fielding percentage, eight points higher than the league average. He also gunned down 56.1% of base-runners trying to steal on him. That was good for second in the league.

At bat Sunny came to the plate 533 times and posted a career high .291 batting average. He also saw career highs in on-base percentage with .365, RBI with 65, and runs scored with 61.

That performance earned Sunny the Rangers MVP for the year, a second Gold Glove, and consideration for league MVP. Great season from a great guy.
Posted by Spiff at 4:20 PM