Teetering on the brink. 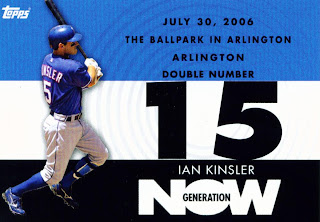 With their loss last night the Rangers came in to play today 5.5 games out in the AL West and 4.0 games out in the Wildcard hunt. That puts them on the verge of being out of the race for all practical purposes. They need to start winning and keep it up.

Apparently that spurred the guys on in game one of today's doubleheader against the Blue Jays in Arlington. Dustin Nippert was solid and Neftali Feliz was his usual dominating self as the offense came through. Ian Kinsler, shown here on card number GN439 of the 2007 Topps Generation Now set, led off and led the charge. Ian was 2-for-4 in the game with a homer. Nelson Cruz posted a 2-for-3 record at the plate while Chris Davis went 3-for-4. Pudge kept pace with the younsters as he managed a 2-for-4 game. All those hits helped the team to a 5-2 victory over the Jays. Now to take game two.

I think I learned my lesson about posting polls. Two votes in three plus days and one of them was mine. Think I'll let opinions be heard in the comments section from now on.

Starting tomorrow I will be unable to post for a week or so. I will attempt to preload a selection of in person and through the mail autographs. Hopefully I can figure out the automated posting and you find the cards enjoyable, even if not taylored to the latest Rangers' news.
Posted by Spiff at 8:07 PM