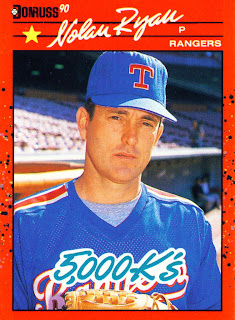 Nolan Ryan looks unimpressed on card number 659 of the 1990 Donruss set. Why? He's probably trying to figure out how the A's can be such a problem for the Rangers in the last couple of weeks of the season. A 72-79 team that is 17.5 games out shouldn't be much of a problem. At least not enough of one to cost a team a potential post-season spot.

Nolan's incredulous that such a team could be a problem when he had no problem with a much better team. He's likely recalling his sixth no-hitter, tossed against Oakland in 1990. Of course he has in mind the reason for the card, his 5,000th strikeout. That came against Rickey Henderson in 1989. Rickey's cap said "A's" but the scorecard said "K". The poor A's couldn't even show Nolan up when they weren't playing against him. When Rickey passed Lou Brock as the all-time stolen base leader, Nolan tossed his seventh no-hitter the same night. Possibly some overshadowing going on there.

Nolan knows the A's. At least how to beat them. Well, the early 1990's A's. The good teams. This cellar-dwelling team is a tougher nut to crack apparently.
Posted by Spiff at 9:06 PM

seriously, break up the A's! They have been AWESOME these past two weeks, the Royals, too. Last place teams are supposed to play like last place teams dammit! Sorry bout your Rangers, I'm pulling for them, but they aint helping their own cause.

I know, the guys have nobody to blame but themselves for this.