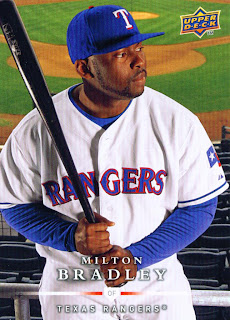 The Cubs have suspended Milton Bradley for the rest of the 2009 season and are apparently not planning on him being back. The suspension follows an interview where Milton refused to answer questions and then a follow-up interview where he went out of his way to bash the Cubs. Following the second interview the Cubbies GM suspended Bradley. A bad situation to be sure. When Bradley played for the Rangers, as shown here on card 484 of the 2008 Upper Deck First Edition set, there were concerns that he would act out this way. Texas dodged the bullet but it seems that Milton just couldn't hold it together for more than a season at a time.

Michael Young's season might also be over. He is now saying that he tried to come back too soon from his injured hamstring and re-injured it. There is no timetable for his return. Next season perhaps?

It is also looking more and more likely that Josh Hamilton will not put on an appearance again until next season as well. Real bummer.
Posted by Spiff at 12:03 PM

Hey, you guys still have stuff to be excited about... Kinsler, Cruz, Andrus, Borbon, Feldman, Byrd-all having spectacular, break out seasons. The Rangers are a really fun team to watch this year. I say good riddance to Bradley and Soriano both...