Byrd is flying high at end of season. 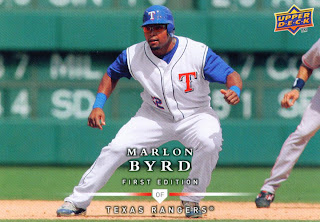 So the Rangers are down to two on their elimination number and are six games out in both races. Ain't gonna happen boys.

Don't tell that to Marlon Byrd though. Marlon, pictured here on card number 181 of the 2008 Upper Deck First Edition set, was named AL player of the week for last week. During that time Marlon pushed in 11 RBI and had three home runs. Ron Washington has already said that he would like to have Byrd in the outfield next season and Marlon seems intent on proving to everyone the wisdom of the choice.

In other news, Ian Kinsler cranked his 30th home run over the weekend to get into the 30-30 club. Nice to see a good mix of speed and power in a player.

The 2009 Benchie awards have started over on The Bench. I have entered my Jon Matlack and Texas Rangers collections. In the first round Matlack has a comfortable lead but my Rangers collection is getting hammered by a pretty impressive Red Sox collection. Make sure to head over and lend your support. First round voting ends October 4th
Posted by Spiff at 2:50 PM

Boy, the Rangers kinda tanked during this stretch run. I was pulling for 'em...maybe next year.