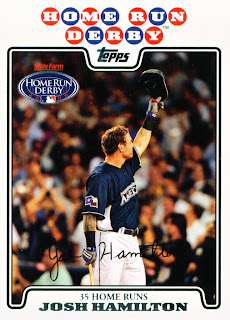 So the Rangers are eliminated in the AL West as of last night. Their 11-0 loss sent them out of the race with a resounding thump. Ouch! Maybe next year. At least this season has been a fun ride and the team stayed in official contention until the last week or so of the season. That is something that is nice to see.

Josh Hamilton is also out. This afternoon the Rangers made the official decision to shut him down for the last few games of the season. Hamilton, seen here on card UH202 in the 2008 Topps Updates and Highlights set, has been down since the 2nd with a pinched nerve in his back. Hopefully that is something that can be ironed out before next spring. The question now becomes, will Josh's injury trouble this season have any impact on his long-term contract hopes?
Posted by Spiff at 8:53 PM